Who We Are and How it All Began – Part 3

I ended up spending over two years working in the deserts of Kuwait. I was first assigned to a joint base in which both Kuwaitis and American Troops were stationed, Camp Doha. I trapped over 300 feral (wild) cats off this camp during the short time assigned here. After a few months, I was given the opportunity as a supervisor of my own camp at Camp Virginia. This was a bit out there in the desert and without direct supervision on base. It was a forward operating base for the preparation of deployment of troops into Iraq from there. I was responsible to oversee pest control operations for the base and communicate with headquarters. It was quite the experience.

Feral dogs were a problem on this camp and so trapping was a challenge given the lack of equipment available to do wildlife trapping. Canine and predator trapping is particularly difficult, especially considering the only control options available to us was cage / box traps that were shipped in especially for this task. The feral dogs were chasing and occasionally would attack soldiers in the camps, so the priority was high for quick results. Kuwait had (at the time), no rabies or other routine pet vaccination system. Rabies was a real concern of the Preventative Medicine and Veterinary Staff on the camp.

Trapping canines was a unique skillset that I had to learn. We had no professional baits available to us. We convinced the US Army to donate expired MRE’s (Meals Ready to Eat). I fondly remember opening the packages and getting the “goodies” out for me and my crew. Each package had some type of desert such as M&M’s or another Candy. We would use the main meat based meals to attract the dogs into the sets.

I used “Camo Netting” to drape over the traps and hide them or help them to blend into the surroundings. Camo netting is a camouflage netting that hides equipment from view from above. The US Army had plenty of it laying about and let us use it. I would “bed” the trap into the sandy soil so that the cage wire was not felt by the paws of the dog as it entered the set. We caught our fair share of feral cats and fennec fox as well. The little desert fox called the fennec fox was really cool to catch. We even caught a hedgehog once.

The desert camp had it’s fair share of spiders, scorpions, cockroaches, bed bugs and rats and mice calls as well the occasional snakes and lizards. I fondly remember getting an “emergency” call for a Spiny Tailed Lizard loose in the cafeteria. I laughed as I entered. Seeing the greatest armed forces in the world clambering up on top of the tables and screaming at the sight of this lizard was hilarious. A little camo netting served as a nice make-shift catch net. I was the “hero” of the day. The time spent in Kuwait was a great start to learning this industry. When announcing my departure from being assigned to Camp Virginia, my military point of contact awarded me a Camp Virginia Operation Iraqi Freedom Coin for exemplary service as a contractor for the US Army Command. 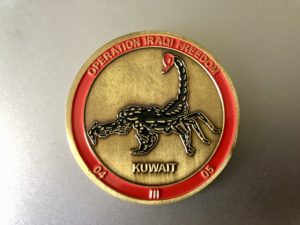 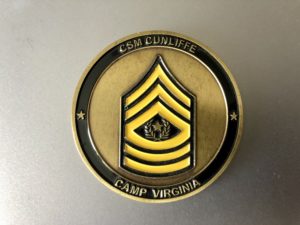